A quick look at some recent Westside sales 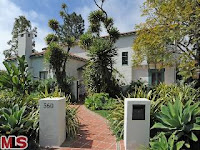 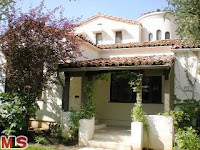 Pacific Palisades - in comparison with Santa Monica, a much busier month thus far with 26 homes selling since 6/23. Most homes sold near or over asking price. 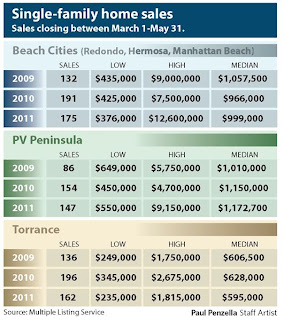 Here is a chart that appeared in last week’s Daily Breeze comparing sales data in the South Bay between March 1st and May 31st over the past three years.

Looking only at the 3-month period, Manhattan Beach had a median price down 1% from 2009 while the whole of the Beach Cities region was down 5% from '09.
(*Source: Manhattan Beach Confidential, chart - Daily Breeze)
Posted by John Skinner at 11:34 AM No comments:

Mortgage rates changed little in the past week, snapping a streak of weekly declines that had taken fixed rates to the lowest points of 2011.

Meantime, the Mortgage Bankers Association on Wednesday said the volume of mortgage applications jumped a seasonally adjusted 13% last week from the previous week. Refinancing activity jumped nearly 17%, according to the weekly survey.

In the latest week, five-year Treasury-indexed hybrid adjustable-rate mortgages fell to 3.27% from 3.28% last week and 3.89% rate a year earlier.

To obtain the rates, fixed-rate borrowers required an average payment of 0.7 point. The five-year hybrid adjustable rate mortgages required a 0.6-point payment. A point is 1% of the mortgage amount, charged as prepaid interest.
Posted by John Skinner at 11:31 AM No comments:

One in nine homeowners nationwide are more than 90 days behind on their mortgage payments and fear of foreclosure has desperate homeowners turning to loan modifications or foreclosure rescue companies for help. But that may be a recipe to falling prey to a foreclosure scam.

Foreclosure scammers will promise you everything while using a wide variety of tactics and targets like asking for an upfront fee and then disappearing with your money. Since foreclosure laws can be complex and confusing, almost anyone can become a victim.

Here are some red flags to help you spot a scam:

Posted by John Skinner at 11:23 AM No comments:

Articles you should Read

How to Tell if Your House Market Has Hit Bottom: A good article by David Crook of the Wall Street Journal. The fundamentals of the Westside/South Bay markets are different than the examples they use but still a good educational piece.

California home sales extend their slide in May: An LA Times article about the overall California market and the struggles it continues to face amongst financial chaos.
Posted by John Skinner at 11:06 AM No comments: 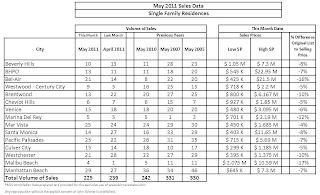 Though on a national level inventory is at an all-time high, the Westside has clearly bucked that trend. Inventory continues to decrease and homes that are priced appropriately are attracting a frenzy of buyers and leading to price stabilization. Due to the lack of inventory, sales volume has decreased month over month for the third straight month in the areas we track. Bel-Air, Pacific Palisades and Malibu Beach were the only areas to truly buck the trend of declining sales volume. Santa Monica (down almost 50%), Westchester and Brentwood fell off in sales volume significantly compared to last month.

The average difference between original list price and sale price continues to shrink back to normal levels (4-6%) in most areas. The pricey locales of Bel-Air and Malibu Beach had a large discrepancy but those can be attributed to a few high priced listings that were severely overpriced and finally sold for market value. If you take those out of the equation the average would drop in the 7-9% range.

A quick look at a few individual sales: 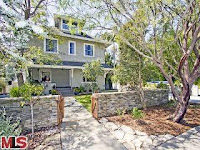 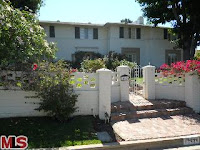 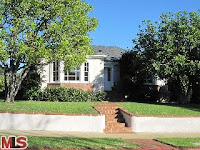 1056 Iliff Street (Pacific Palisades)- This 2+2, 1,641 sq. ft. house was a short sale that was listed at $1.2M in January, increased to $1.3928M in February and sold in probate court for $1.326M. This is a classic case of what can happen in probate and short sale situation. The listing agent prices the house below market value and gets an accepted offer. Since the offer has to be fully approved by the court or bank, it is still listed as active in the MLS but at the price of the accepted offer. 60% of the time the original offer falls out as was the case in this instance.
*Source: MLS
Posted by John Skinner at 2:20 PM No comments:

Email ThisBlogThis!Share to TwitterShare to FacebookShare to Pinterest
Labels: SFR May Sales Data 2011 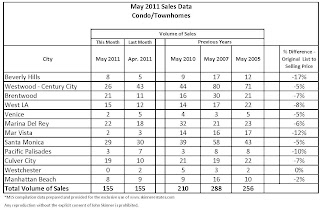 Sales volume matched last month’s at 155. Compared to last year, sales volume is down 35% and good inventory is hard to find with many willing seller’s unable sell their place since they would be short to the bank.

To give you some perspective, sales volume for May is off 85% since 2007 when we saw record volume. With the market declining at least 20% since then and many people refinancing many people can’t afford to sell. The good news is a seller that is priced appropriately will attract a lot of attention and command a strong buyer.

Since inventory is declining, so is the gap between list price and sale price. The average difference is around 6% when you take into account areas with more than ten sales. This difference was over 12% a year ago.
Posted by John Skinner at 2:12 PM No comments:

Email ThisBlogThis!Share to TwitterShare to FacebookShare to Pinterest
Labels: May Sales Data 2011 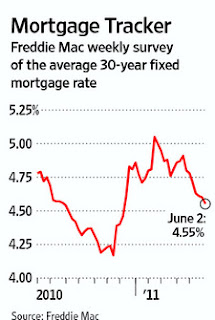 Home loan rates continue to fall as does mortgage demand

Responding to sluggish economic and housing data, mortgage rates have fallen for the seventh straight week, following the yield on Treasury bonds to new lows for the year.

But many people remain on the sidelines of the housing market, expecting further price declines or unable to refinance their existing home because they have little or no remaining home equity.

The yield on the 10-year Treasury note, a benchmark for home lending rates, dropped below 3% on Wednesday for the first time since early December and mortgage rates also fell to levels not seen since then, according to the widely watched Freddie Mac Survey of lender offering rates.

Freddie Mac said Thursday that the typical rate for a 30-year fixed-rate home loan declined to 4.55% this week from 4.60% a week earlier. Not since the week of Dec. 2, when the survey showed the 30-year mortgage at 4.46%, have rates in the survey been lower.

Borrowers in the survey would have needed good credit and 20% down payments or 20% home equity in the case of refinancing to obtain the rates. They would have paid 0.6% of the loan amount on average in upfront lender fees to obtain the 30-year loan and 0.7% for the 15-year loan, Freddie Mac said.

A weekly survey by the Mortgage Bankers Assn., released Wednesday, found that applications for new mortgages decreased by 4% during the week that ended May 27, compared with the previous week. Refinance applications were down by 5.7%.

"The last time mortgage rates were this low, refinance volume was more than 20% higher," said Mike Fratantoni, the mortgage trade group's vice president of research and economics. "It is likely that many borrowers still cannot qualify to refinance given the lack of equity in their homes."
Source: LA TIMES, CNN
Posted by John Skinner at 12:38 PM No comments:

A great article appeared in the Wall Street Journal this past Saturday that everyone with any interest in purchasing or selling real estate should read. It provides a balanced look and some great tips on how market dynamics lead to a great time to buy.

Here is a quick intro and the link is at the bottom: There are growing indications that it is a good time to buy. Mortgage rates, which fell to 4.55% for the week ending June 2, according to Freddie Mac, are near 50-year lows. Homes have become more affordable than they have been in years: According to Moody's Analytics, the ratio of home prices to income is now 20.9% lower than the 15-year average through 2010, and 12.5% lower than the 1989-2004 average.

A historic glut of homes, meanwhile, has created a buyer's market: There were about 15 million vacant homes in the U.S. last year, according to John Burns Real Estate ConsultingInc.—some 3.1 million more than normal.

Article: Why It’s time To Buy
Posted by John Skinner at 12:30 PM No comments:

Email ThisBlogThis!Share to TwitterShare to FacebookShare to Pinterest
Labels: WSJ - Why is it time to buy

It seems like it would be a simple thing to do – look at a house on the internet, go and see it and enlist that agent to make a deal and represent both sides. Let’s look at this more closely.

In an analysis of homes that were bought between 2003 and 2006 in Manhattan Beach and then sold again in the past year, we generally see that prices are back to 2004 levels or are very close to those numbers. The good news for seller’s is the market has firmed up quite a bit around mid to late 2004 prices after trending toward 2003 numbers. Now, you will always have exceptions to the rule in either direction but one particular sale caught the attention of the Manhattan Beach Confidential blog. 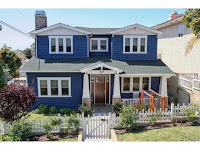 Look at 319 S. Poinsettia in the Hill Section, a big (6br/6ba, 4825 sq. ft.) Craftsman that is positioned as far south as you can get – it borders Boundary Place, the alley/street that divides Manhattan Beach from Hermosa. The home has no views, is positioned on an odd slanted lot and hasn’t been improved from its 2004 condition.

In 0ctober 2004 it sold for $2.137M and in the past week it sold for $2.495M, a 17% mark-up from late 2004 levels. This mark-up is a bit alarming and one thing that can be noted right away is the buyer used the listing agent on the deal. Some buyers will go through a listing agent to try and make sure they get the deal and possibly save a little money.

***However, buyers that go through the listing agent need to clearly understand the listing agent’s fiduciary responsibility is to the seller! Had the buyers on this particular property used a reputable local agent, they possibly could have saved themselves $130-200K on this transaction. Plus, a buyer’s agent acting in the best interest of their client is invaluable when it comes to the request for repairs process and having a strong pulse on the trend of that particular market. Local areas such as Manhattan Beach and Santa Monica operate on a micro level and could be trending far differently than what people read about nationally or regionally in the newspaper.

Another area where it is important to work with a reputable agent is internet errors and wading through the misinformation that can be found online regarding comparable properties. Around 21% of the data realtors individually submit for posting on real estate web sites is not updated or erroneous when changes are made to the price or when the property is sold, according to a report released last month by Trulia. Though the data available online is undoubtedly helpful, misinformation and properties that are listed on the web but aren't actually for sale can add up to a handicap for buyers. "You're probably going to get exposed to inaccurate information," says H. Pike Oliver, executive director for industry outreach at Cornell University's Program in Real Estate. "There's no real assurance."

Always make sure you consult with a reputable agent before making any major decisions.
Source: Manhattan Beach Confidential, Smart Money
Posted by John Skinner at 12:13 PM No comments: