Phenomenal opportunity to own a charming 3 bed/2 bath home located on one of Westwood’s most desirable streets. Character and warmth fills this traditional style home with beautiful dark hardwood floors throughout. 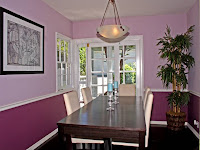 master suite with French doors to back-yard and front bedroom with bay window. Laundry inside off kitchen. Updated plumbing. Easy walk to Century City shopping center, dining, houses of worship and much more. Located in the Westwood Charter school district!

Email ThisBlogThis!Share to TwitterShare to FacebookShare to Pinterest
Labels: 1910 Fairburn 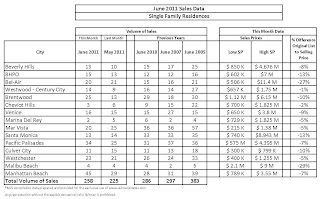 Total Single Family Residence “SFR” sales on the Westside and Manhattan Beach were higher than May (258 vs. 225) but still trail last year’s June output (286). Though sales have slowed down we must remember that last summer buyer’s were incentivized with tax credits that are no longer in play. The average % difference between original list price “OLP” and sale price is still shrinking. In some areas such as Bel-Air and Malibu Beach where the difference was over 25%, quite a few homes that were on the market for over 9 months finally sold and were originally priced way too high. If you take those numbers out, the average difference ends up being around 6%.

Home sales under a million dollars are on fire right now and garnering a lot of attention. Buyers are taking advantage of record low interest rates and want to get into the market before the conforming loan limit of $729,000 is pushed back to $625,000 on October 1st. 2039 Linnington Ave. in Westwood came on the market late last week for $985,000 and reportedly had over 200 people at the Open House. An appropriately priced home that does not require a lot of work does not have much competition in the current marketplace and should sell quickly with favorable terms to the seller.

A quick glance at the numbers shows that Manhattan Beach had a phenomenal month in terms of sales volume and blew away all the other areas we cover with 45 sales! This is a higher number than the sales volume during the peak bubble year of 2005. 11 of the homes sold at asking or higher than the OLP. 19 sold for 1-7% below OLP and 14 sold 8%-16% above OLP.

Pacific Palisades had a very solid month selling 9 more homes than it did last month and the sales numbers were roughly the same as the peak bubble years. Six of the sales were above the OLP and 17 sold within 4% of the OLP.

Santa Monica is still dragging along in terms of sales volume with ½ as many sales as in 2010, 2007 and 2005. However, the average sales price is staying consistent and if you eliminate two homes that sold way below OLP, the difference between OLP and sales price is only 5%.

A look at a few individual sales:

1021 Wellesley and 1025 Wellesley- Brentwood- These two 10,130 sq. ft. lots were purchased together creating a once in a blue moon opportunity to have almost a ½ acre of flat land north of Wilshire. The properties were listed for $2.050M and sold for $2.510M, 23% above the list price. Over time this will be an incredible buy as flat lots like this are extremely rare. 10 to 15 years from now this buyer will look like a genius. 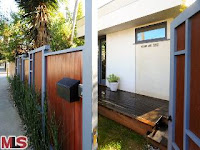 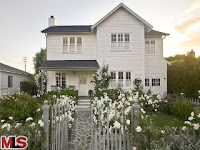 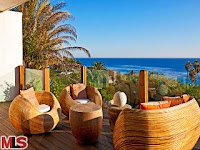 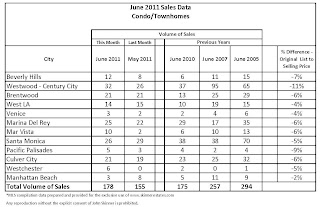 23 more units were sold compared to last month with Mar Vista, Westchester and Westwood showing the most improvement over the previous month. The average loss from OLP for all areas combined was only 5.92%. This is further evidence the market is an even playing field as the difference between OLP and sales price was around 10% this time last year. Though sales were up over last month they are still off by 65% in comparison to 2005. For some perspective, Westwood had the most sales with 32 this month…in June 2007, Westwood had 95 sales!
Posted by John Skinner at 11:14 AM No comments:

According to Altos’ market action index we have multiple areas that show stability several years in a row. The # 30 is a representation of a baseline for equal supply and demand, based on the absorption rate of inventory. For purposes of this post we are using Pacific Palisades as an example. Most of the areas we cover on this blog are trending in the same manner.

Although this graph shows there is quite a bit more inventory than there are buyers, it also clearly shows (look at the darker line for the 90 day rolling average) that we have had very consistent activity for over 3 years! On the graph you will see where the MAI was in January, 2008. Take a line and draw it straight across to today’s MAI. The inventory has been stable for about three years. It may appear be a buyer’s market, but the inventory that is there, is steadily and consistently absorbed.
Posted by John Skinner at 11:10 AM No comments:

California residents must have carbon monoxide detectors in their homes as of July 1, 2011. This timeline applies only to single-family homes that have appliances that burn fossil fuels or homes that have attached garages or fireplaces. For all other types of housing, such as apartments and hotels, detectors should be in place as of January 1, 2013. Types of fossil fuels include wood, gas and oil.

Detector
According to the senate bill, the detector must sound an audible warning once carbon monoxide is detected. It also must be powered by a battery, or if it is plugged in, have a battery for a backup. The detector also must be certified by national testing labs, such as the Underwriters Laboratories. The packaging on the carbon monoxide detector will state this. If the CO detector is also a smoke detector, it must still meet the above standards and must sound an alarm that is different than the smoke alarm. Carbon monoxide detectors typically can be purchased for about $20 and up.
Exemptions
Although the law targets units that are occupied by humans, the law exempts state and local government property, as well as property owned by the University of California Regents. The law requires local jurisdictions to comply; however, they may amend their current ordinances to fall more in line with the law.
Fines
California law states that anyone who does not comply with the law may face a $200 fine. However, residents will receive a notice of 30 days to correct any violations before they will be fined.
Posted by John Skinner at 11:05 AM No comments:

Links to Articles You Should Read

Posted by John Skinner at 10:41 AM No comments: