On October 22nd, the Santa Monica city council will possibly finalize regulations that seek to further restrict a homeowners ability to remodel or build a new home. After initiating an interim zoning ordinance of a maximum lot coverage of 55%, the city is looking to further restrict the lot coverage to 45% for two-story homes, making it one of the most restrictive in Southern California.  Some City planning officials are concerned the city is moving way too quickly with these proposed regulations and are STRONGLY ENCOURAGING residents to voice their opinions at the October 22nd City council meeting at 6:30pm and by e-mailing your thoughts to councilmtgitems@smgov.net with the subject line- R1 Update.

The lot coverage used to be 61%, so a drop to 45% would signify over a 35% reduction for two-story homes and when you account for an attached garage, it drops even further.  The City of Santa Monica calculates square footage including outside walls and the full size of an attached garage. The City of Los Angeles measures inside the walls and only counts 1/2 of the garage space.  Currently, the Pacific Palisades has 65%, Mar Vista has between 50-60% based on lot size, Venice has 55% and Brentwood is at 45%.

The city has spent the year considering how to incentivize renovating homes rather than replacing them in the city’s four single-family neighborhoods — Sunset Park, North of Montana, North of Wilshire and a small part of Pico.Unfortunately, in trying to inhibit builders from building "McMansions", the chosen path "over-corrects" the issue and severely inhibits those with inherited floor-plan flaws (i.e.- lone master upstairs), especially those with lots less than 6,000 sq. ft.

Upper-story maximum parcel coverage of 22.5% is also being proposed. It is currently 30%. The new restriction would make it extremely difficult on people who own homes on smaller lots to have adequate bedroom spaces on an upper level.

The standards would also encourage accessory dwelling units, or ADUs, which homeowners build in their backyards and rent out.  The state of California is mandating this to help address the housing crisis. Interestingly, property owners who already have homes at the 61% maximum, would be able to build ADU'S, thus covering over 70% of the lot.  Thus creating an even bigger gap between those who already have bigger homes and those who do not.  IF YOU ARE A SANTA MONICA PROPERTY OWNER, MAKE SURE YOUR VOICE IS HEARD.


Posted by John Skinner at 5:20 PM No comments:

Mortgage rates roughly track the direction of the 10-year Treasury note, the yield of which has fallen by more than 10 basis points over the last month and roughly 100 basis points throughout 2019. Falling mortgage rates have yet again caused a resurgence in refinancing activity. The most recent mortgage application data from the Mortgage Bankers Association showed that refinance activity was 163% higher than a year ago. The same trend has not occurred when it comes to loans used to buy a home. Purchase loan volume was only up 10% from a year ago, the Mortgage Bankers Association reported. 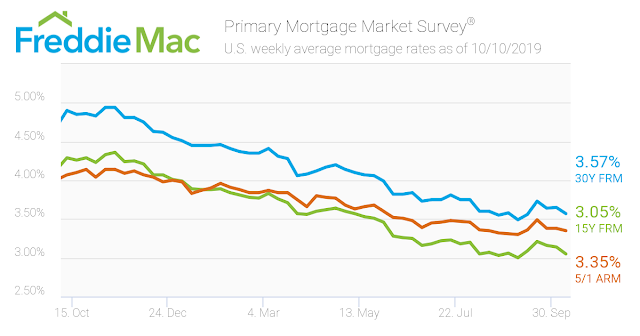 Source: Marketwatch
Posted by John Skinner at 5:17 PM No comments:

A surge in in commercial development, the Westside’s tech industry growth, major international investment and a seven-year run of very low interest rates have led to a significant rise in median sale prices over the past five years.

The median sale price in Inglewood climbed 63% from the high $200K range in 2014 to $485K last year, according to PropertyShark. Inglewood is seeing a massive surge in investment thanks to the 300-acre L.A. stadium and Entertainment district that will house the Rams and Chargers beginning next year and the Clippers franchise proposing a new stadium.

Culver City saw the second biggest increase in median prices at 60% from $800K to $1.2M. All but three of the 67 markets PropertyShark analyzed in Southern California saw the price of homes grow and half of those appreciated more than 20%.

Source: The Real Deal
Posted by John Skinner at 4:12 PM No comments: 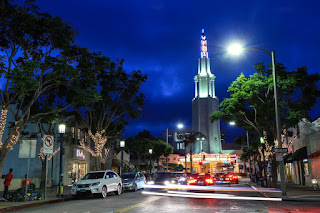 For the second straight year, Westwood ranks as the most expensive place to rent an apartment in California with an average rent payment of $4,944.00 a month. It is a 4.1% jump compared to last year. Westwood ranks 4th nationally behind three areas in Manhattan, New York. West Hollywood’s 90048 zip, comes in 2nd at $4,896 and 5th nationally.

Source- Rentcafe.com
Posted by John Skinner at 3:38 PM No comments: