*Please remember to pay your property taxes! They will be considered late if they are not received by December 10th and the fines are hefty!

*According to National Association of Realtors (NAR) 34% of home buyers nationwide are millennials.


*The city of Santa Monica is requiring earthquake retrofitting for over 2,000 buildings over the next four to six years. Depending on the building age and size, the cost per unit could be $8,000++. This new disclosure has led to buyers wanting a credit from sellers to help pay for the assessment if the building does not have a strong enough reserve to absorb the cost.

*The Pango group (owns multiple escrow companies in Southern California) reported that they had 951 escrow openings in October with 685 closing, leading to a 73% close rate. In October 2016, they had 839 openings and 671 closings for an 80% close rate.

*The two main financial forces we are seeing behind buying property on the Westside are from the technology sector (i.e. Silicon Beach) and families that are already living in the area and purchasing property or providing major assistance when it comes to a down-payment for their children. From a Silicon Beach perspective, the elite are making a lot of money and tend to be fairly young. As Silicon Beach grows to become a major player worldwide, Westside real estate looks like it will continue to appreciate over the next few years unless something unforeseen happens.The areas benefiting the most are Venice, Mar Vista, Santa Monica, Playa Vista, Culver City and Westchester.

*It is really difficult for typical single family home buyers below the $1.5M price point. Since land has become so valuable along with the demand for luxury homes in West L.A, Mar Vista, Playa Del Rey, Westchester, etc being so strong, developers/builders are willing to knock down or add square footage to a home that would otherwise easily be fixed up by a young family. The builder comes in with an all-cash offer with a very limited contingency period that a normal buyer acquiring a home cannot compete with.

*Typically, multiple offers are a close fight but in speaking with colleagues, the majority of multiple offers are won by one party that is paying significantly more than others. One quick example- A home listed for $1.750M in Hollywood Hills with just five offers ended up selling for $2.250M…the next closest offer was below $2M.

*Los Angeles County is expected to add 1 million more residents by 2035. With housing already scarce, development restrictions in place in many areas and people living in their homes longer than ever before, how is Los Angeles going to deal with this influx?

*If Trump’s new tax plan passes in the manner that it is currently constructed, it will not only take away important deductions from the majority of homeowners in the Westside/South Bay, but it will also further discourage current homeowners from selling, further intensifying the inventory shortages that are plaguing the region.  Check out our latest blog post on the subject which includes key highlights and tons of information from our economist.
Posted by John Skinner at 6:34 AM 1 comment:

Here is a quick summary of a very informative article on the subject provided by our chief economist Selma Hepp. We highly recommend you check out her recent Economic Straight Talk as well as this recent article in the Los Angeles Times - Realtors are worried about Trump’s new tax plan. California homeowners should be too

*The tax proposal increases the standard deduction from $6,350 to $12,000 for individuals and $12,700 to $24,000 for married couples. Thirty-four percent, or about 6.12 million, California taxpayers itemized their deductions in 2015, with average total itemized deductions equaling about $36,800. This will make a notable difference in their adjusted gross income.

*Removes the ability to deduct state and local income taxes which will markedly increase taxes for many California residents with incomes above $75,000.

*The lower cap on the mortgage interest deduction would be particularly detrimental to buyers in Los Angeles communities where median prices exceed $1million. For example, a buyer of a $1.2 million home with a $1 million mortgage would pay almost $40,000 in amortized interest in the first year. However, at the $500,000 mortgage interest deduction cap, the buyer would be able to deduct only half of that interest, thus losing about $20,000 in deductions. Again, if this is a first-time buyer and falls in the income range of between $100,000 and $200,000, the loss of a $20,000 mortgage interest deduction would make a notable difference, not only in the resulting tax bill but also on the decision to purchase a home. (The current senate proposal has adjusted this cap back to $1 million.)

*While the proposed tax plan reduces the number of tax brackets, not everyone’s tax rate will decrease, and these deductions will play a big role in where a household falls along the income spectrum.

*A $10,000 cap on real estate property taxes would also impact those buying a home priced above $1 million, since California property taxes are around 1.2 percent. In Los Angeles metro, 20 percent of home sales year to date were priced higher than $1 million. For example, a buyer of a $3 million home would lose $20,000 in property-tax deductions.

*The proposed change that limits the capital-gains exemption used by homeowners when they sell would be another major blow for supply conditions. Under the new proposal, homeowners must have owned and lived in the home for at least five of the last eight years to qualify for the exemption. Currently, the rule is two of the last five years. The exclusion would also be limited to one sale every five years rather than one every two years. In addition, households with incomes over $500,000 if married or $250,000 if single lose the exclusion. With the current capital-gains exemption limit at $500,000, it already poses a constraint on many current owners whose homes have appreciated significantly since they purchased them and who consequently choose not to sell. Further limiting the use of the capital-gains exemption will slow housing turnover even more. At the end of the day, while severely undersupplied inventory may help push prices higher, the proposed changes would lead to fewer home sales and an even more difficult environment for first-time buyers.
Posted by John Skinner at 6:16 AM No comments:

However, the five-year Treasury-indexed hybrid adjustable-rate mortgage decreased slightly to 3.21%. This is down from 3.22% last week, but up from 3.07% last year. 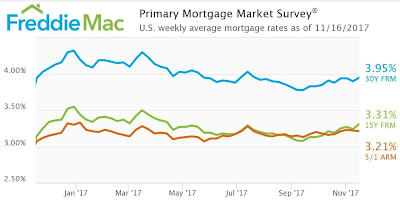 Source: Housing Wire
Posted by John Skinner at 4:55 AM 1 comment: 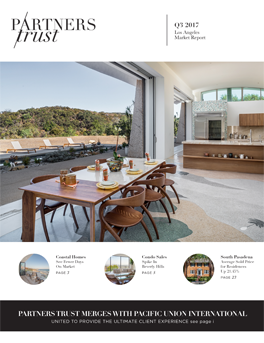 Posted by John Skinner at 6:22 PM No comments: